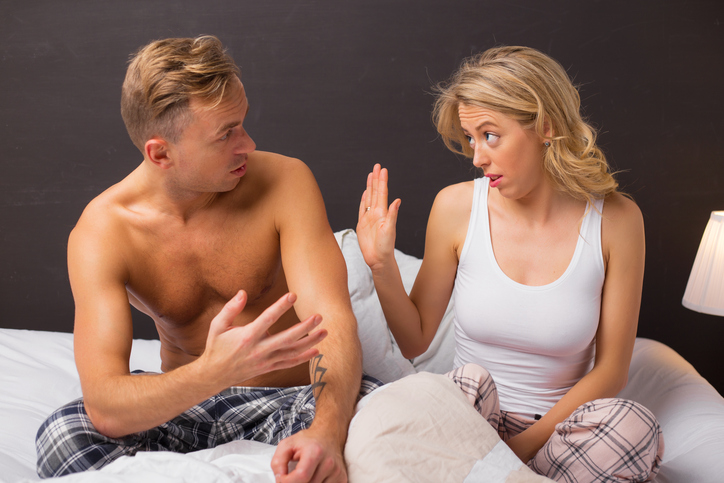 Have you noticed your libido dwindling lately? Are you more easily annoyed when your husband or boyfriend initiates sex? If so, you may be one of millions of women suffering from a phenomenon that I dubbed “The Trump Bedroom Backlash.” In my clinical practice, I have noticed a subtle downward trend in female sex drive throughout the entire 2016 presidential campaign. The trend picked up steam when the Access Hollywood tape was released, and since Trump won the election, it is so common a complaint in my office that I decided to write about it

The misogyny displayed by Trump throughout his entire presidential bid (from the Rosie O’Donnell comments to the Megan Kelly comments to the Carly Fiorina comments) has undermined the hard-fought progress to de-objectify women.  According to the Southern Poverty Law Center, 36 anti-women “hate crimes” were reported within one week of the election.

And now that women’s reproductive rights are in dire jeopardy (very real threat of overturning Row V. Wade, promise to defund Planned Parenthood, etc) women feel under assault. Beyond the overt sexism in the campaign, both men and women are troubled by the overall threatening tone. Serious concerns about basic civil rights have taken a toll on people’s vitality, mood, and sense of the future. This general malaise can easily zap libido.
Make America Sexist Again

It is once again completely acceptable to openly judge a woman based on her looks, sexualize her role in the office, and “grab her by the pussy.” Not that these behaviors have ever been absent in our society, they are always operating below the surface. The difference is the new climate in which men feel emboldened to say out loud what political correctness had recently rendered to their private thoughts. The filter is gone and anything goes.

Trump’s cavalier and dismissive reaction to the sexual assault described on the Access Hollywood tape as “locker room talk” was triggering for a large swath of American women. Many survivors of sexual assault felt “revictimized” by his words. After decades of victim-blaming, the American justice system finally started to recognize date rape, marital rape and campus assault as serious issues. That momentum is now stopped in its tracks.

I think the ‘slap-on-the-wrist’ sentence for Stanford University rapist Brock Turner left many women shell-shocked. Outrage over dismissive reactions to sexual violence was activated, not just in my office, but across America. Then, when Trump minimized his own admission of sexual assault, the level of ‘in-your-face’ white male privilege was more than some women could process. And so, en masse, these women subconsciously collude in a form of solidarity against men who feel entitled to sex. For some women, by mere virtue of having a penis, men are perceived as potential predators. On an unconscious level, all men equal Trump; all men equal Brock Turner.

There are millions of men who are also offended by this type of rhetoric. You don’t have to be a woman or even a survivor of sexual assault to be triggered by such blatant misogyny. The arrogant, macho bravado of Trump is reminiscent of the schoolyard bully. And many men remember being the target.

What I Hear in My Office

One of my patients admitted, “Since Trump won, the thought of having sex is unappealing to me. All I can picture is him boasting about exploiting women; or Brock Turner’s dad saying ‘boys will be boys.’ It makes me sick.” This sentiment rings throughout my office on a frequently increasing basis. Another patient lamented to me that since his wife discovered he was a Trump supporter, “she wants nothing to do with me in the bedroom. It’s as if I am suddenly the enemy.” A couple sat in my office and she said, “If you support Trump in any way, shape or form, then we do not share core values. And if we do not share core values, it’s hard to be sexually attracted to you.”

Breakdown in the Bedroom

I think this insidious drop in libido is a backlash against the misogynistic tone that Trump ‘let out of the bottle.’ I must acknowledge that there are millions of women who voted for Trump who are unlikely suffering from this phenomenon. They are, no doubt, unfettered by his sexist rhetoric. Keep in mind that I practice in Los Angeles, a Mecca for Progressives and Liberals. This may slant the issues clients bring to my office, but, rest assured, this phenomenon is plaguing women all across America.

If you are one of these women, it is important to talk about your feelings. And if you have unresolved trauma from actual sexual assault or sexual humiliation of any sort, find a qualified sex therapist to help you process the impact of that trauma on your femininity, sexual self esteem, overall outlook on men, and your current relationship.

It is important to understand, however, that you may be unwittingly blaming your partner for other peoples’ crimes. Unfortunately, many good and respectful men are bearing the brunt of this ‘Backlash.’  Don’t throw the baby out with the bath water! Sex is a healing, rejuvenating activity and might be just what you need to reconnect. If, however, you have come to realize that your partner would fit in all too comfortably in Trump’s locker room, it may be time to do some serious reflection. Be very careful not to confuse what’s happening politically and culturally with what’s happening in your personal relationship.