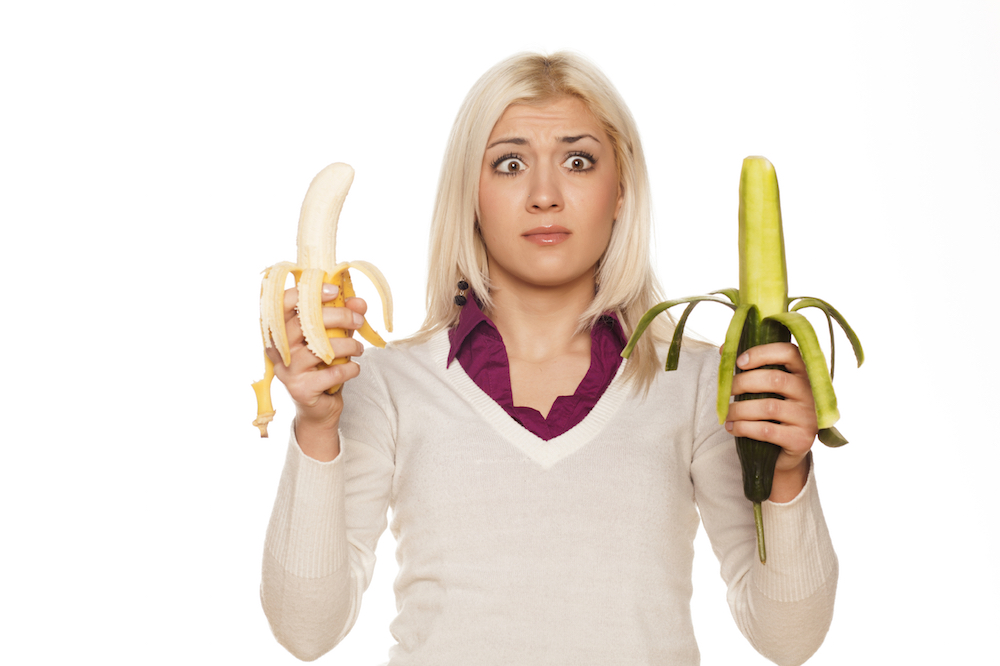 Ladies, have you ever felt like a sort of Dr. Jekyll/Mr. Hyde when it comes to sexual attraction? One day you find that aggressive, cocky guy at work to be completely offensive; then a week later you have a sex dream about him? You’re not crazy. Let me explain. Fascinating research shows that heterosexual, premenopausal women value different traits at different times of the month based on fertility status.

Since prehistoric times, human females have been faced with evolutionary trade-offs. The dilemma? Good “genes” vs. good “mate.” Should “genetic fitness” trump loyalty and stability? Are “masculine” features worth more than an investment in raising offspring? Is an aggressive, dominant partner more attractive than a trustworthy provider? The answer—It depends on a woman’s fertility status.

The Ovulatory Shift Hypothesis (aka mixed mating strategy, dual mating strategy, and “good genes” theory), suggests that evolutionary forces drive female sexual behavior in subtle, yet profound ways. You may be surprised to learn just how powerful hormones can be! And the most interesting part—we don’t even realize what’s happening. This all unfolds in unconscious ways. Evolution is calling the shots here.

When women are fertile, we are more likely to fantasize (and flirt) with men other than our primary partners. We are also more likely to be unfaithful. In a study published in Current Anthropology in 2005, rates of “extra-pair paternity” (getting pregnant by a man other than your partner) range from 1% to 55% depending on the population. One study reported that one in twelve pairs of fraternal twins have different fathers. Wow!

Men who are lacking in the masculinity department are more vulnerable than men who are more “genetically fit” (tall, facial symmetry, body symmetry, deep voice, copious body hair, competitive, dominant, etc). It is genetically advantageous for women to procreate with men who possess these stereotypically masculine features. But for the other 25 days of the month, we tend to go for the nice, stable guy.

Even a man’s facial features are regarded differently during ovulation. When we are ovulating, we rate “masculine” facial features as high on sexiness, but not high on appeal as long term mates. When we are not fertile, we tend to be attracted to “softer” features such as larger eyes (which are linked with stability, nurturing, and loyalty). Think Leonardo DiCaprio.

Facial Scars Can be Sexy

When we are ovulating, we rate facial scars as sexy. Can you guess why? When we are fertile, we value traits of aggression. In a study published by Burriss in 2009, facial scars (especially ones that appear to have been earned during battle) were shown to increase attractiveness in males as short-term partners.

Facial scars may “advertise” valuable information about a man, such as a willingness to engage in battle to protect a mate or offspring. He’s the guy you want around if a burglar breaks in during the night. Or the neighbor’s pit-bull gets loose while you are watering the flowers.

Fertile women prefer the scent of males who score high on a questionnaire-based dominance scale. What? We want dominant, competitive guys? A study published by Havlicek in 2005 showed a positive correlation between male dominance and odor sexiness when rated by women at peak fertility, but not at other phases of the menstrual cycle.   Women who are ovulating also find competition and dominance toward other men as sexy. This is the guy who humiliates and picks on the smaller, nicer guy at the party. You think he’s a jerk, but you find yourself attracted to him and don’t know why. It’s because you are ovulating.

Here’s the kicker! When we are fertile, we rate faithful men as “unsexy.” What? Because promiscuity is highly associated with genetic fitness, we find this otherwise offensive trait as attractive when we are under the influence of hormones. So even though that masculine guy may kick the burglar’s ass, he may not stick around to help you raise Junior. As I said, it’s a trade-off.

Just as women don’t realize we are under the influence of hormones, men don’t realize they may be attracted to a woman because she is fertile. Fascinating research shows that men can actually “smell,” “see,” and “hear” fertility. Crazy, huh? In a study published in Evolution and Human Behavior in 2007, research showed that lap dancers earned more tips per shift over a 2 month period when they were ovulating than at other times in their menstrual cycle.

In another study published by Roberts in 2004, men unwittingly rated digital photos of women’s faces as more attractive when they were fertile than at other stages of their menstrual cycle. The women wore no make in all of the photos, regardless of menstrual status.

Men also unwittingly sense fertility through our voices. In a study published in 2008, Pipitone explained that the frequency of our voices are slightly higher when we are ovulating. Female voices higher in frequency are considered more attractive (feminine). Think Marilyn Monroe. Also, men rate the scent of ovulating women more attractive than non-ovulating women, suggesting an unconscious capacity to smell opportunities for procreation. Singh described this phenomenon in his research published in 2001.

Throughout history and across cultures an “hourglass” figure (a waist to hip ratio of 7/10, to be exact) has epitomized beauty. Think Sophia Loren. Men subconsciously perceive ample breasts and broad hips as indicators of a woman’s capacity to bear and nurse children (in fact, these are reliable indicators of fertility). A 2006 study by Jasienka et al showed women with large breasts, narrow waists, and noticeably larger hips have 30% higher levels of estadiol overall and mid-cycle than other women (making them 3x more likely to conceive).

So lots of stuff is going on that we are unaware of. The next time you have a Dr. Jekyll/Mr. Hyde moment, remember that nature has its own plan and just go with it.